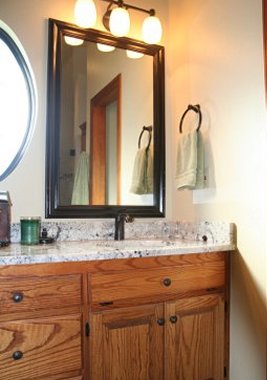 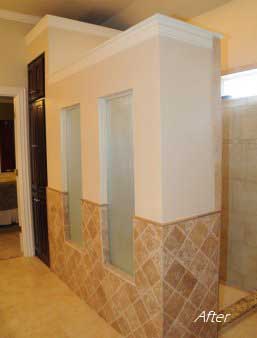 When Jeff and Sherri Gilbert of Amarillo built their new home in 2004, they went for a basic blueprint.

"It's a nice house, in a nice area, but we really didn't do a whole lot of 'fancy' things when we had it built," says Jeff. "We just planned on a basic design and thought we might update later."

When later came, the master bathroom was the first thing the Gilberts wanted to spruce up. "We had a bathtub and shower in our master bath, but really didn't use the tub much. So we decided to remove the tub and install a large, tiled, walk-in shower," Jeff explains. "We also gained a linen closet in the process - and that's something we really needed."

The remodel took a total of five weeks and also included wainscoting the entire bathroom and installing a beautiful set of his-and-her vanities.

The Gilberts appreciated the politeness of the DreamMaker crew and how tidy they were. "Remodeling is always an inconvenience, but when the crew is considerate and cleaning upm after themselves, you hardly notice," Jeff says.

Choosing DreamMaker Bath & Kitchen as their remodeler was easy for the Gilberts - Jeff had known DreamMaker owner Steve Betts for 10 years and had discussed potential projects with him many times before. Jeff had also seen DreamMaker's high quality work on display in a family member's home.

"When Steve first opened up the Lubbock office, I referred my brother and sister-in-law to him," Jeff explains.

"The house was a fixer-upper and he completely gutted and remodeled it. I was very impressed with his work there."

Jeff says he'd refer DreamMaker Bath & Kitchen to anyone, and is considering adding on a patio enclosure in the future.

"We'd certainly go to DreamMaker again - no question," he says.

And does his wife love the new bathroom?

To start realizing your dream of a new bath, kitchen, or any other room in your home, contact DreamMaker Bath & Kitchen of Amarillo at (806) 356-8002. Financing options are available for those who qualify.